It’s Polly’s birthday but there is to be no lie in as we roll out at 0500 ready to raise the anchor at first light. Its been blowing hard through the anchorage off Deshaies all night and the forecast suggests we should have 20-25kts from E or ENE for the 80M passage up to St Kitts. Coffee in the cockpit as we watch the boats around us surge about on their cables, from the smaller yachts hard up against the beach to the mega yachts and small ships out in the mouth of the bay, anchor lights shining from the mastheads as the Eastern sky starts to lighten.

I wake up Daisy who stands by to clear the anchor chain as it piles up in the chain locker under her berth. Pols sparks up the donkey and we edge forward, the windlass pulling in chain as our forward motion takes the load off it. In comes the stainless hook of the snubber and the 60m markers. A stronger gust, Cherubino’s bow veers off, Pols puts in the engine into neutral and we fall back, the rode stretching out ahead. Back into gear, creeping ahead and the windlass is back to work. The 30m marker comes aboard, round the gypsy and down the hawsepipe to the locker where Daisy is pulling it back into the locker to stop it castleing. The chain tightens as it reaches down vertically to the anchor which is dug in deep. A grunt or two from the windlass and Old Cold Nose rips free from the bottom. The boat’s head swings to leeward as the anchor, still covered in mud, sand and weed breaks the surface. Pols ups the revs and we head off out of the bay while Daisy switches from anchor to navigation lights as the sun’s still not up. A mile or two to get clear and we round up into the wind to hoist the mizzen, roll out the genoa and kill the engine. Its always a wonderful feeling to bear away and accelerate with sails pulling in the absence of the engine’s noise. We set course, NNW, for a point a couple of miles off Pinnacle rock on the NE corner of Montserrat, about 35M away. Behind us the sun is rising and we can see humpbacks swimming North crossing our wake as we reach away from Guadeloupe at about seven knots.

Daisy says she feels unwell and makes faces until Dora finally surfaces and actually is sick – at which Daisy cheers up. The wind is building now perking up to 25 knots while frigate birds hover to leeward hoping for snacks more tempting than the contents of Dora’s tummy. To leeward Montserrat changes from a grey outline into a solid image, the peak of the volcano that buried the capital Plymouth hidden in cloud but the huge rivers of ash clearly visible. The southern half of the island is still abandoned but as we progress North we can see the village of Old Northwood peached high on the Atlantic side with its church and tiny football stadium. The wind is now nudging 30 knots as we pass the top of Montserrat and bear away to pass just to the leeward of tiny, barren Redonda. 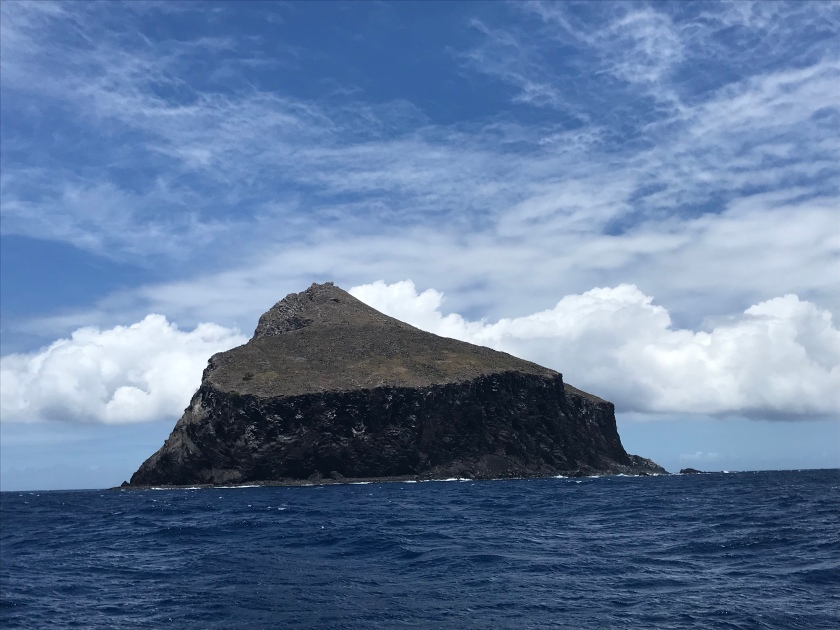 Fortunes were made on Redonda ‘digging the turds of Leeward Island birds’ but now the phosphates have all gone and Redonda is uninhabited except for a few pairs of Blue Footed Boobys who circle the boat hopefully before working out we aren’t fisherfolk and pushing off again. In the short break when we’re behind the island Pols produces delicious wraps for lunch. The children pretend to be too ill to eat them – all the more for the grown ups!

Past Redonda we close on the SW corner of Nevis, the water shoaling rapidly from about 1000m to less than 20m. The seas steepen and I’m glad we’re in a bigger rather than a smaller boat. We roll away half the genoa as we harden up to sail North. The wind’s still F6/7 but I’m hoping we may get a little shelter to the W of Nevis. Nope, nothing doing there but the sea flattens out and we’re close reaching at eight knots with less than ten miles to go. Suddenly, the winds’s gone, the boat’s bolt upright and we’ve hardly got steerage. Looks like Nevis does throw a lee after all… no worries tho’, there’s a darkening on the water ahead and before you can say ‘mine’s a cuppa, milk no sugar’ its blowing 30knots and we’re off again. The narrow strait (imaginatively named… ‘The Narrows’) between Nevis and St Kitts provides the wind with a excuse to oscillate through ninety degrees but soon we’re across the gap and looking at the wreck in the unfortunately named Shitten Bay. Round Green Point and we’re in White House Bay and the anchor chain is rattling out. The hook is well set in 10m and although we’re still being buffeted by the wind there’s no swell in the bay and we feel secure. The boom covers are on, sun’s setting and we can pop the cork on a bottle or two of bubbles to celebrate Polly’s big day. We’ve taken 11 hours to log 80M. It’s been a wonderful little Caribbean passage.

5 thoughts on “From Guadeloupe to St Kitts”