I feel like I’ve really got to know this small town on the tip of the Bermuda Triangle, not because I’ve been going around visiting every museum I can find but because I have simply been doing everything I would do if back in Woodbridge. These errands include running, walking dogs, provisioning and even walking through the town square every morning (Evelyn)!

We did go to the town’s heritage museum which was really interesting, we basically learned how the first settlers on the island lived and what things haven’t changed since then…

Peering into the Unfinished Church

English sailors first arrived on Bermuda in 1612 where they began to build settlements. Obviously they needed to build houses for shelter and warmth but they hadn’t bought any architects with them (surprisingly) so the captain instructed the ship’s carpenters and designers to do the job – we can see this because most of the early day houses were built similar to a boat’s hull.

After securing shelter they moved onto to think about water sources, until this point they were collecting rain water but wanted to find fresh water lakes because they were more reliant. They didn’t manage to find any though so decided that the houses being built would need white flat roofs with gutters leading to a water butt where water was stored for each household. They still use this system today!

In the kitchen, quick and efficient ways were needed to be able to cook the extravagant meals they had bought from England. Some of these thrifty inventions made by settlers include:

• Coral sieves – Fan coral has a wide surface area and the perfect sized, naturally woven net made the perfect solution for a sieve while making bread.

• Measuring coconut shell jugs – This obvious solution for measuring out ingredients became very popular with everyone as they served for multiple purposes as well as bowls, cups and even treasure boxes!

• Conch shells – Mainly used as toys, conch shells made great horns for the kids who had joined there parents on the journey to the ‘new world’.

• About everything else – Cedar trees grew in thousands all around the island and as settlers needed to make way for new villages they were cut down and used for thing from bath tubs to dining tables! As the only seemingly never ending supply, cedars were used to create everything on the island and most of this furniture is still being used today because of it’s strength and sturdiness! Sadly, over 90% of the trees got wiped out in the 20th century as ships came in bringing bugs that would kill the roots. 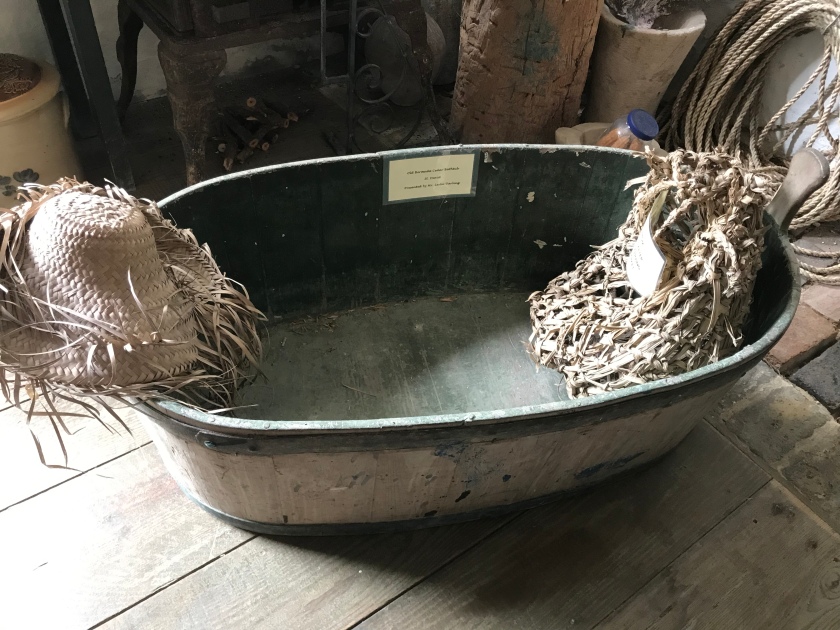 Although regularly visited by cruise ship passengers, St.George has managed to stay unspoilt and beautiful. One of my favourite places to be was the town park. Here locals would wander during their lunch breaks and Dora and I would spend the morning cart-wheeling around and doing school. Another one of my favourite places was the coast where we would walk Seaweed (the dog) and her best friend. Every corner you turned another fort would wait for you and the beauty of the water and flora was exquisite.

This has been my favourite place to visit throughout this trip and I can’t wait to come back, everyone is so friendly and the island is so beautiful – I really recommend visiting!

3 thoughts on “Living in St George’s”